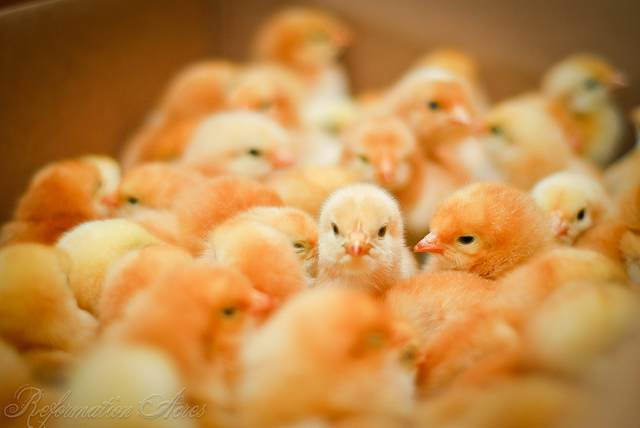 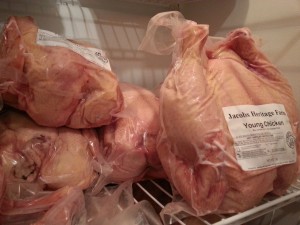 For meat, we raise Freedom Rangers, not industrial chickens. Many pastured poultry producers, in the interest of keeping costs down and maximizing profit, choose to raise the same kind of chicken you find in the supermarket, the ubiquitous Cornish Cross. It is a white chicken that has been bred to grow very very quickly, and to yield a tremendous, disproportionate amount of breast meat, the kind American consumers seem to prefer. Their breasts are so large that their legs can’t grow fast enough to support them, so many of them end up crippled and unable to walk. They reach their market weights at a shocking 6-7 weeks. This bird also has seemingly had its wits bred out of it. It’s a depressing chicken, which many producers will testify will die of thirst rather than exert more than a bit of effort to get water. They are not particularly good foragers.

We raise a type of bird derived from heritage birds in Europe (mainly France) and the U.S. They grow a bit more slowly, reaching their market weights at a relatively mature 9-11 weeks. They have retained their normal chicken proportions, which means their legs are strong and meaty, but they still have ample breast meat. They also are more active and interested in foraging than their industrial-type counterparts. Our Rangers are allowed as much time out in the pasture as possible, where they can run around, nibbling leaves, chasing bugs, and living good happy chicken lives.

What that has to do with succulent meat is that their older age means their flavor has had more time to develop, so it tastes more like some of the old-timers remember chicken as tasting. Also, they exercise, so they get muscles. You get tender muscle meat, not the mushy-type soft meat associated with confined young chickens. This is delicious meat with more yellow omega 3 fat and less saturated fat than fast growing breeds. Happy chickens taste better!

Visit our current meat inventory to see the chicken meat that we have available. 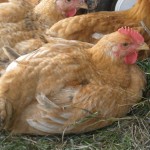