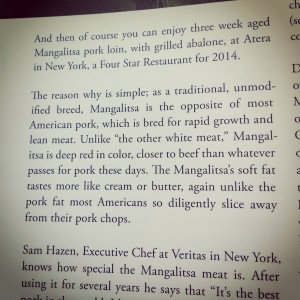 From the book, “The Mangalitsa Pig – Royalty is Coming to America” by Mate Dobesch

A Hungarian heritage breed with the best bacon in the world and it’s low in cholesterol… That is amazing! When we started learning more about Mangalitsa pigs we knew that this heritage breed would be a perfect match for our fourth generation Hungarian farm.

These unusual long-haired wooly pigs were developed in the early 19th century in Austro-Hungary at the request of aristocracy who sought a succulent fat-producing hog. Mangalitsa pigs became the prominent pig breed raised in Hungary until the 1950s when they began to be phased out by leaner, faster-growing commercial pigs. By the 1990s the Mangalitsa was nearly extinct when fewer than 200 pigs remained in Hungary. Today this breed is experiencing a resurgence as people are remembering that cooking with lard and natural fat is in fact pure and healthy…not to mention absolutely delicious.

The Mangalitsa is one of the fattiest pigs in the world; on average 65-70% of the carcass is fat, and lean meat is only 30 – 35% of the carcass, compared to over 50% in modern breeds. However, lard has less saturated fat and more unsaturated fat than an equal amount of butter, and it contains no trans fat (unlike margarine, vegetable shortenings and hydrogenated fats). And lard has been seeing a comeback in recent years, as chefs realize that no other cooking medium has the qualities and flavor of lard, rehabilitating the reputation of this delectable pork fat.

Mangalitsa meat is considered among the tastiest pork in the world. The meat of the Mangalitsa pig is reddish (unlike the “other white meat” that Americans are accustomed to), highly marbled with creamy white fat, and is high in omega-3 fatty acids and natural antioxidants. This is due to the natural diet of forage, wheat, corn and barley. Mangalitsa lard is lighter and  it melts at a lower temperature than lard from other pigs because it contains more unsaturated fat. It has a soft creamy buttery texture that will make any food taste better and it’s amazing for baking.

In Hungary, most Mangalitsa pork becomes sausage or salami. Because of the high fat content, it is perfect for charcuterie. Cured Mangalitsa pork products can spend a longer time drying, which deepens the flavor without losing moisture. In Spain, traditional ham makers discovered that Mangalitsa is ideal for the long, air-cured process that makes their hams famous around the world. A leg of Mangalitsa pork can age for up to 3 ½ years, while maintaining a moist and pliant texture, a rich, deep red color and complex taste.