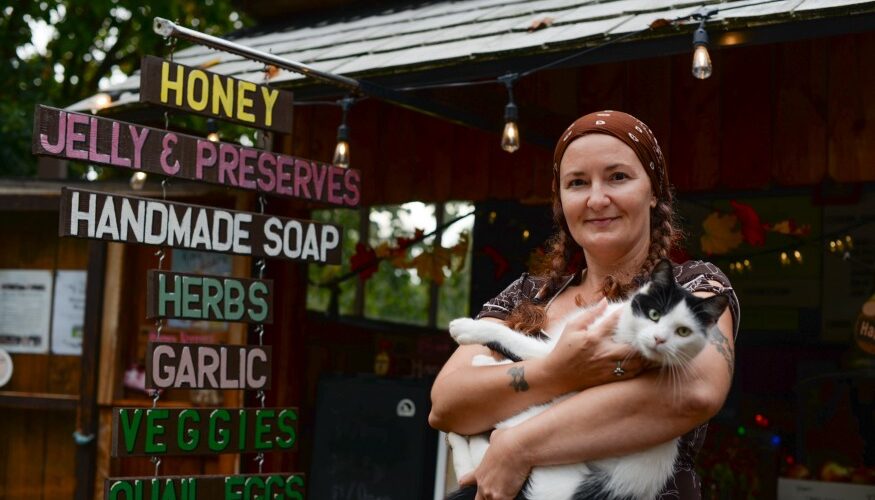 Jennifer Jacobs speaks about her fourth generation family farm and the fifth generation that is soon to come in this article by Melanie Mohler that was intended for The Devils Strip newspaper.

Just past a fork in the road of Jacoby and Wright Roads in Copley, Ohio stands a welcoming farmstand. If you walk up to the stand, you’ll find a variety of items depending on the season.

Behind the farmstand sits Jacobs Heritage Farm, owned and operated by Jennifer Jacobs, the fourth generation of her family to live and work on the property.

Jacobs lives in the farmhouse nearby, which was built in 1859. Her great-grandparents, Frank and Agnes Jacobs, emigrated from Hungary and purchased the farm in 1919.

“It was pretty much a farm even before my grandparents and great-grandparents took it over,” Jacobs says.

She has the records of previous land owners and homeowners before her family, dating all the way back to Simon Perkins, a co-founder of the city of Akron.

Her great-grandparents initially grew crops, including Hungarian peppers and cucumbers, just as they did in Hungary.

Jacobs grew up next door to the farm, but never really saw it as a working farm. Her grandparents had taken over the farm but they were getting older and crop farming was difficult work. By 1980, Jacobs’ uncle was converting the land into a golf course. In 1998, Jacobs moved into the farmhouse and about 15 years ago began converting the golf course into a farm once again. Today she focuses on raising heritage livestock.

“My uncle always used to tell me don’t be a crop farmer…Animals have their own challenges, but I enjoy [them] more,” Jacobs says.

Jacobs prides herself in raising heritage breeds, which originated in the Old World and have been bred for centuries. Current heritage breeds that Jacobs cares for include Mangalitsa pigs and Jacob sheep.

Mangalitsa are a Hungarian pig breed. Jacobs notes that raising the Mangalitsa is a nod to her Hungarian heritage. But she has other reasons for raising heritage breeds.

“I think [heritage breeds] are more hardy,” Jacobs says. “A lot of the modern breeds have been bred for meat…but they’re not as natural.”

Jacobs shares that the farmstand is her creative outlet. You can find Jacobs’ own products at the stand, but also those of farms that she partners with such as Zachry Farms, Fritz Family Farm, and R&D Micro Farm.

“…I feel like there are a lot of awesome farms that make awesome things and they don’t know what to do with it after they make it,” Jacobs says.

You can almost always find honey, eggs (chicken, duck, or quail), and firewood at the farmstand. When available, other items include produce, flowers, homemade soap, goat milk fudge, birdseed, and handmade cat toys. The stand is open year-round, although there is a limited selection of products in the winter due to lower temperatures which can cause certain items, such as honey, to freeze. However, Jacobs can set out items at the stand if customers text or message her on social media.

Meat from Jacobs Heritage Farm is also available seasonally. The meat is processed offsite, but is returned to sell at the stand. Jacobs is currently taking orders for geese to serve for Christmas dinner.

Jacobs’ honey, which she harvests and processes herself, along with some of her other products, can additionally be found at Sassy Sunflower in Copley Circle, the Exchange Market in Medina, Local Roots in Wooster and even at the Strongsville and Fairlawn Target locations. She also has an Etsy shop where she can sell products to customers that are not able to visit the farmstand.

Jacobs works four days a week doing international sales for a local plastic company, but the remainder of her time is dedicated to the farm. She has a friend that helps and occasionally local children will assist, but otherwise she is the sole caretaker of her family farm.

However, soon there will be a new farmhand. Jacobs recently learned she was pregnant with her first child.

“It was kind of unexpected, but it happened,” Jacobs says. “I think it was meant to be…”

She hopes her son will take an interest in the farm and continue working on the land as the fifth generation of the Jacobs family.

Jacobs is due with her son in March. She jokes that she’ll be “lambing” around the same time that the ewes on the farm are lambing.

Note: This feature was originally meant to be published in the November issue of The Devil Strip. However, the The Devil Strip stopped publishing new content due to financial issues on October 18. I am proud of this story and still wanted to share it, hence why I have posted it here on this platform. Thank you for reading.